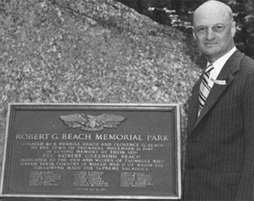 Banford Beach and Hariet St. John Merrill had a son Edward and a daughter named Dorothy. Edward Merrill Beach was born on January 14th, 1894 in a farm house at 320 Daniels Farm Road. This house was built in 1829 by his great-grandfather Charles Beach. This farm was located where Daniles Farm School now stands. Merrill grew up there until his father sold the farm in 1914. the family then moved to Stonehouse Road.Merrill's education started with a one room school house followed by graduation from Bridgeport High School. Merrill went on to study at New York University, Pace Institute and the American Institute of Banking.

In 1913 Merrill began his banking career as a messenger with the First Bridgport National Bank. He left the banking field for a short time to serve in the Army stationed in Washington, DC. When World War I ended Merrill returned to banking. It turned out to be the only place of business for Merrill as he rose to assistant cashier in 1926,and cashier in 1937. Merrill became Vice President, of the Connecticut National bank in 1939, then Senior Vice President in 1950. He served as a member of the Board of Directors and then retired in 1962.

Merrill married Florence Greening on September 29th, 1923 in Bridgeport. They had one son, Robert G. Beach born in 1925. At the age of 19 Robert was killed while serving in World War II. On July 3rd, 1944 he died with 62 other soldiers when hit by a V-Bomb while stationed in London.

Approximately 166 acres of land in the Town of Trumbull was purchased by Merrill and Florence Beach from the Bridgport Hydraulic Company. Three days later, they gifted the land to the Town of Trumbull as a memorial park to their only son. The park was named Robert G. Beach Memorial Park in memory of Robert and the 21 outher boys from Trumbull who gave the supreme sacrifice in World War II.

In 1955 Merrill published a book in conjunction with the 225th anniversary celebration of the Congregational Church in Trumbull. The name of the Book is Trumbull: Church and Town. This gave Merrill the opportunity to present a lifetime of historic research on the Town of Trumbull. To this day this book remains the standard text on Trumbull's history.

Merrill beach has been very active with civic and youth activities throughout his life. He has been an ardent supporter of the Boy Scouts and one of the early proponents of Little League Baseball in Trumbull. In addition, he gave generously of his time and talents to such other projects as the YMCA, the Town Board of Finance, the Trumbull Park Commission, the Congregational Church, the American Legion, the Booklawn Club, the Algonquin Club, the Bridgeport Chamber of Commerece, the Twilight Club and the Long Hill Cemetary Association.

Merrill Beach's most treasured accomplishment was the formation of the Trumbull Historical Society in 1964. Merrill once said "I wrote a live letter explaining the importance of capturing the town's history for future generations. It was picked up by the First Selectman Clarence Heimann. We talked over my ideas and the socieity was established in July 1964. I guess you could say I built the little fire that got it started."

Merrill Beach has written two other books on Trumbull history. In 1971 They Face the Rising Sun about Trumbull's Unity Cemetery and in 1975 From Valley Forge to Freedom wherein the story is told of the slave Nero Hawley who served in the Revolutionary War.

Merrill Beach was the first president of the Trumbull Historical Society. He remained active and became the President Emeritus until his death on June 22nd, 1992.