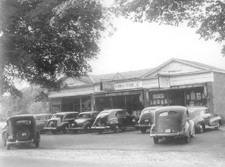 Trumbull Center was a much smaller commercial area when I was growing up. Coming down Church Hill Road from Main Street, first there was the former Trumbull Town Hall, (now the Helen Plumb Building). On the corner of Daniels Farm Road (where the Mobil station stands today) was Kurtz's General Store. Mr. Kurtz also had a second store on the corner of Lake and Main. After Kurtz's, there was a building with just three businesses, Sciortino's Barber Shop, Mac Kenzie's Drug Store and the Trumbull Food Store. The entrances and parking were on the White Plains Road side. There was just an empty field behind the stores. After this building, were the cemetery, Center School and the Trumbull Center firehouse. Across the street from the stores was (and is) the Trumbull Congregational Church. Nichols Memorial Library was located in the building that now houses the church's Past and Presents Gift Shop. The only other business in the area was Tickey's Hardware down past where Twin Brooks Park's entrance is. After that, there was nothing until Briarwood Farms Ice Cream at the corner of Noble Avenue in Bridgeport.

Fred "Doc" Mac Kenzie ran the pharmacy and he had a soda fountain in there too. You could buy lots of other stuff besides medicine, a kid could get a kite or a model airplane for instance. Herb Hay ran the Trumbull Food Store, which sold fresh meat in addition to groceries.

My Uncle Frank owned the barbershop. At Christmas time, he'd set up a model train display in the window. When kids would come by and tap on the glass, he'd interrupt his haircutting, put on an engineer's hat and run the trains to the delight of the children. When World War II started, he knew he'd have to go in the service and talked to the owner of the shopping center, telling him he'd like to keep the barbershop. The owner was a really nice gentleman and let him keep the fixtures and everything there during the war, charging him next to nothing to hold the space until he came home after the war.

Uncle Frank was a volunteer fireman with the Trumbull Center Fire Department. There was hardly anything to do in town, and lots of young men, so the Fire Department was very selective and it was a very prestigious to be accepted as a volunteer. When he got married, the reception was held at the firehouse, and he took all us little kids for a ride on the fire engine up Daniel's Farm Rd., past Tomek's Farm and down Strobel Rd. We had a ball ringing the bell and sounding the siren. In those days, a loud fire horn blared when there was a fire. The horn was also sounded at noon and 6pm in one long toot. We didn't have 911 back in those days, we didn't even have dials on the phone! To report a fire, you'd pick up the phone and tell the operator where the fire was. The Phone Company activated the fire horn to sound the alarm and alert the volunteers and let them know where the fire was.

At night, someone would stay at the station house to open the doors and start the engine in case of fire, but they relied on volunteer who worked locally during the daytime. When the alarm went off, the rule was, first one to reach the firehouse got to drive the engine. Being, nearby, Uncle Frank stood a good chance of getting there first. Now, in those days, lots of businessmen would go to the barber for their daily shave. If the fire horn went off, Frank would drop everything, sometimes leaving a customer all lathered up ready for his shave (or even worse, halfway through). He'd run out the door, telling his client to wash himself off and just to shut the door when he left. My Aunt Nancy wrote about this to the newspaper comic Jimmy Hatlo, author of "They'll Do It Every Time", and it got made into a comic and published in the paper.

During the summer, the Fire Company would hold an annual carnival as their big fundraiser, which lasted several days. A carnival company would come in and set everything up and the firemen would run the booths. We didn't have rides back then, but there would be cotton candy, food and games of skill and chance. There were the spinning wheels of fortune, and there was another kind we called the bumper cars. These booths had a little toy car that ran on a track. The guy running the booth would give it a push and it would run back and forth on the track bouncing off a rubber bumper at either end. There was a tab sticking off the side of the car that clicked along pegs positioned over a painted row of numbers.

Whatever number it stopped on would be the winner. If you were really lucky, it stopped on the one red line within the number and you won one of the "big" prizes, maybe even a bicycle!. It cost a dime per bet. The highlight of the carnival was the new car raffle. The firefighters sold the tickets, plus you could buy them at the local stores. At only 10 cents a ticket for a chance on a brand new car, they sold lots and lots of them. One year, a guy bought a book of tickets at the drugstore and handed them to his girlfriend to fill out for him and he left. The girlfriend filled them out, but she also gave a couple to her girlfriend who was at the soda fountain at the time and it turned out her friend actually won the car! Now, 1946 was the first year cars were being sold again since the war started, there was a long waiting list to buy one, so a new car was like gold. The guy had a fit and the whole thing ended up in court. Because it was the girl's name on the ticket, the judge ruled the car belonged to her.