The Merritt Parkway - The Queen of All Parkways 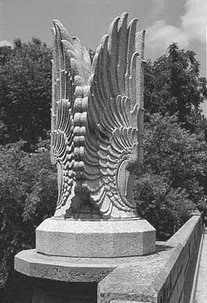 In 1895 there were exactly four cars in the United States. By 1900, that figure had risen to about eight thousand. Without a sufficient system of limited-access highways, free of traffic lights, stop signs, and other traffic control devices, traveling became a major hassle for people in the New York area. With the completion of the Bronx River Parkway (1907-1923), the world's first limited-access highway that led out of New York along the Bronx River, a new breed of roadway had emerged. Not only could it transport many motorists to their destination in a small amount of time, but also they could enjoy the natural balance of roadway and scenery that was a parkway.

The Hutchinson River Parkway, (Constructed c.1924-1941), was one of the many roads that led out of the metropolitan area. However, due to early opposition from officials in Fairfield County, Connecticut, at the time of completion, the "Hutch" abruptly ended at the NY-CT border at King Street (Route 120A). With the Boston Post Road through Connecticut getting more and more crowded, plans for a connecting road into Fairfield County were needed.

With the approval of Stamford congressman Schuyler Merritt and others, groundbreaking for the "Merritt Highway" began in 1934 in Greenwich, under the authority of Governor Wilbur Cross. On the design team for the road were experts in various fields. Thayer Chase and Earl Wood were in charge of landscaping. Edward Ferrari, the sculptor and artist, designed many of the ornaments found on the parkway's bridges. And possibly the most famous, George L. Dunkelberger, the talented architect whose task was to design the nearly seventy overpasses and underpasses that are today the fame of the Parkway.

The first 17.5 miles of the Merritt Parkway were opened to the delight of many in June of 1938. From King Street on the NY-CT border to U.S. Route 7 in Norwalk, where the state's first "Clover-Leaf" type of intersection stands, Governor Cross cut ribbons at each town line until the traffic reached Norwalk. The Merritt Parkway was now the most advanced limited-access highway (i.e. can only be entered of exited from designated entrance and exit ramps) in the United States, if not the world. The last twenty miles of the parkway were opened incrementally as the sections in Westport, Fairfield, Trumbull, and Stratford were completed and ready to be opened to traffic.

To Pay, or Not to Pay

It was in 1939 that the legislature declared it would place a temporary Toll Station designed by George Dunkelberger on the shores of what would later be called Toll Gate Pond, a man made lake caused by the damming of the Byram River during construction of the roadway. The outcry of many a citizen followed. Some considered the 10-cent toll as double taxation, since funding for the Merritt was apparently to come from taxes, and not tolls. Theodore Fleischmann, an unemployed electrical engineer, paid the first toll at the temporary station in Greenwich. Others were not as cooperative. Rebelling drivers, especially New Yorkers, protested the tolls by paying in pennies (thereby slowing traffic) and throwing trash on the road. One protesting man made a point of coming into the small toll lane at near full parkway speed, passing the toll collector and throwing his dime onto the grass. Police later apprehended him.

However, not everyone was upset by the advent of the tolls on the Merritt. When the Connecticut Highway Department was required to fill an anticipated twenty-four positions for toll collectors at the plazas, they were surprised to receive hundreds of applications. Why the high demands? It was because the job was said to pay $100 to $125 dollars a month, in a time when the minimum wage was set at a quarter.

The state finally won, and permanent rustic, Adirondack style Log Cabin like toll installations were placed on the parkway between King St. and Round Hill Rd. in Greenwich. The toll remained a dime for some time after, and was inevitably raised over the years. This Toll Station was a memorable sight to many before its removal on June 25th , 1988 when a section of the razed plaza was taken to the Henry Ford Museum in Dearborn, Michigan.

The Parkway was nearly finished, but one strategic link in the system remained. In the Oronoque section of Stratford on the banks of the Housatonic River, a bridge was needed to connect the Merritt with the future Wilbur Cross and Milford Parkways in New Haven County in the town of Milford. The Conn. Highway Department received a government grant of $1,000,000 to execute the project. A savings of $10,000 was obtained when the engineers decided to use the infamous steel grid deck for the roadway instead of the traditional concrete bed. Had a concrete bed been used, the building costs would have exceeded the grant money, and the bridge would have taken longer to construct.

The Oronoque , Sikorsky , or Commodore Isaac Hull Bridge's completion marked the completion of the Merritt Parkway, and a huge celebration was held on September 2 nd , 1940. Governor Cross and Schuyler Merritt were there, and so was the distinguished Boothe family, collectors of antiquities, who lived on nearby Main Street Putney in Stratford. During WWII, it was designated a strategic bridge and was assigned a 24-hour armed sentry. Though part of neither part of the Merritt or the Wilbur Cross Parkways, it remains an important link in the Parkway system.

A Toll Plaza similar to the one in Greenwich was constructed on the eastern (Milford) side of the bridge on the Wilbur Cross Parkway. Another sister road, the Milford Parkway, or Milford Connector (1940-1942), allowed a spur access (a branch off of the main highway) from the Wilbur Cross to the Post Road (US 1). In later years the Milford Parkway was connected to Interstate 95 (Connecticut Turnpike), also a toll road when opened. The Connecticut Turnpike was completed on January 2 nd , 1958, eighteen years after the Merritt.

Tolls from Greenwich & Milford continued to fund the Wilbur Cross' construction, and by 1941 the Parkway had reached Route 34. Construction on the Wilbur Cross did not resume until after WW II. The Parkway reached from Dixwell Avenue in Hamden to East Hartford & the Charter Oak Bridge (1942), but between there and Route 34 the innovative West Rock Tunnel in Woodridge had not opened until November 1949. The parkway and the later Route 15 then reached Meriden, the Berlin Turnpike (also US 5), and the Charter Oak Bridge in Hartford, where the collection of tolls ceased in 1989. The road then extended from Hartford to Union, CT and the Massachusetts border as a two-laner. This collection of Parkways and other roads was designated Route 15 in 1948.

In the 1970s, the conversion of Routes 8 and 25 into freeways received much controversy as the plan included remodeling of the parkway as well as the demolition of the Huntington Tpke. Overpass (1940-1979), and the Route 8 underpass (1940-1979) in Trumbull. Due to re-grading, many trees were leveled for this project, which received the outcries of many environmentalists and Merritt preservationists, who wanted the road left as it was. However, in this epic battle of preserving history, the State finally had its victory over the public. Later in 1992, the new "Super 7" US Route 7 required further mutilation of the original parkway. All of these improvements remain controversial among Merritt enthusiasts.

As part of a plan to remove all Toll plazas from Connecticut roads after some fatal crashes involving 18-wheelers on I-95 (Conn. Tpke.), the Greenwich, Milford, Charter Oak Bridge and all other tolls on Connecticut roads were all removed by 1989. In the interest of historic preservation, a portion of the Milford Toll Plaza was moved to Boothe Memorial Park in Stratford, though it has unfortunately become the recent prey of vandals, who have decided to mutilate this landmark and important piece of parkway history.

The Parkway's 50 th Birthday was on Sept. 2 ND , 1990. In 1991 it was put on the National Register of Historic Places, to the delight of many. We are lucky to have such a unique feature of the landscape here in Connecticut. Perhaps we should try to preserve this local treasure so that it can continue to be enjoyed by many in the future.
The Trumbull Historical Society
1856 Huntington Turnpike, P.O. Box 312, Trumbull, CT 06611
Copyright © 1964 - 2022
​501(c)3